A month ago, I contacted Shi Jing, who was then a volunteer for the Chinese language website that I created to support the detained Chinese artist Ai Weiwei. The website was originally named "Love Ai Weiwei" (Loveaiww.blogspot.com). Since its creation on April 4, I had renamed it twice, "Ai Ai Weiwei" for May and "i Love Weiwei" for June. Such changes were intended to remind people that it had been another month since Ai's detainment. At the same time, I also changed the small image reflexing Ai in the side bar of this website. The following is a snap shot of the website on 18 June 2011. 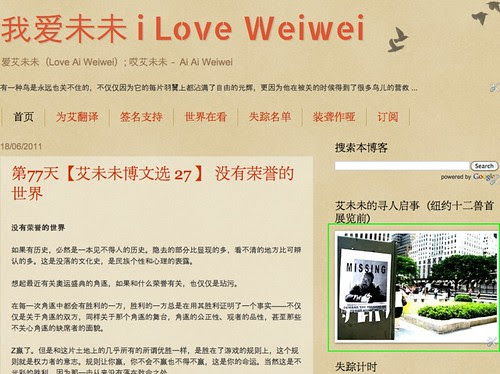 I asked Jing whether she could create an image that serves as a theme image for the website in July (to replace the existing image in the green frame). We had no idea on whether Ai and his colleagues would be released in that month. My point was, no matter what would  happen, we had to prepare for the worst in advance. Jing agreed to give a try and at the same time, she recommended her then roommate ZHANG Rui for an alternative candidate. Two days later, I contacted Rui and she said she was willing to help. And after another day, the world learned that Ai was released on bail. I was, of course, extremely happy about that news (see a picture of me at that moment).

But the story did not stop here. Ai was not allowed to talk to the media about what what he had suffered and some of his colleagues are still missing. That's why I felt that the website should keep running. I did not contact Jing again about the side bar image since she should spend more time in taking care of her boyfriend WEN tao, who was released shortly after Ai's release. It was a very long wait for her. I did talk to Rui and I was glad to learn that she was willing to continue working on this. A few days later, she showed me her first two oil paintings with title "Love Ai Weiwei". 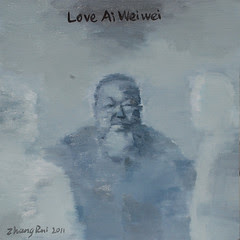 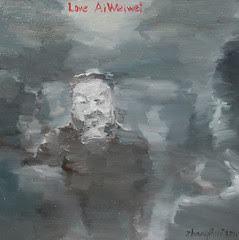 I like her work. The first painting shows clearly a beard face of Ai Weiwei and some shadows of two other unknown figures. The theme color is gray, which associates me with what Ai had been suffered from his 81-day detainment. "Who are those unknown figures?", I was wondering; they might be the guards or policemen but I did not ask Rui. On July 15, The Washing Post reported that "the two guards watched Ai Weiwei constantly, never speaking; they stared at him without ever moving their eyes; they stood close by even while he used the toilet; and when he took a shower, they just stood right next to him, even though they were getting totally wet." Then I suddenly understood. The power of Rui's work is that it gave out this message at the time that we knew very little about what Ai suffered.

The second painting is a more abstract version of the first one. One can barely recognize Ai's face or see the guards, but a suspicious eye is clearly visible at the right side. You can imagine that the figure in the center represents not just Ai, but a person like Ai, such as Liu Xiaobo, Ran Yunfei, Wang Lihong and many others, who are fighting for the universal human rights for Chinese people but are detained or imprisoned by the authoritarian government we have in China now. It is wrong to imprison these good souls; it is right to express our true feelings of these good souls. This painting did not end with a negative message. "Love Ai Weiwei" in red font clearly expresses the love and support from the artist and from people like you and me.

These two paintings were published on Loveaiww site (link) on 27 June and the readers loved them as the post was among the top 10 most visited posts of the coming month. Rui was happy about this and she said Ai is an angle and she was planning to paint another one about Ai. She wanted to show what Ai really is and should be. Over the next two weeks, she gave me some updates from time to time. One challenging task she gave me was to give a name for this painting. I thought about it and figured out three:
Pinyin is the official system to transcribe Chinese characters into the Roman alphabet, and it is based on pronunciation. In Chinese, the sir name of Ai Weiwei 艾 has the same pronunciation as the character 爱 which means "Love" in English. The reason I have "Ai is Love" in all three options above is very clear: on the one hand Ai Weiwei gives his love to many people by fighting for their rights, and on the other hand, it beautifully connects Chinese Pinyin with English by the same meaning of love. Rui said she had a similar feeling on this and she picked the option 3 finally. By applying Aristotle’s Syllogism upon this title "Ai is Love, Love should be Free", we can derive that "Ai should be Free". Ai Weiwei is still not allowed to speak or travel freely, and the recent tax hearing shows that he is even not a major player in the charge. On July 8, Rui published her work on her own blog: http://blog.ruizhang.net/?p=57. And this becomes the new theme image of Loveaiww website. 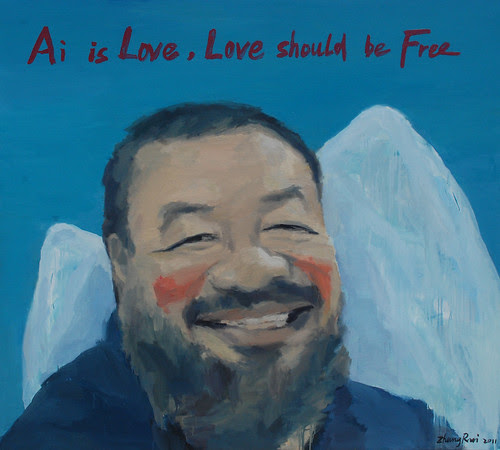 This shows the yearning for love and freedom. This is the Ai Weiwei I want to see. Art can speak for itself, but I thought that by providing some additional information about the creation of these art works of Rui, you will be able to appreciate more about this young artist and her work.
发表于 7/18/2011