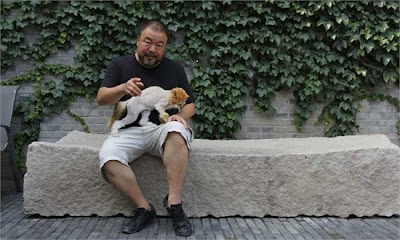 Ai Weiwei relaxes in his studio in Caochangdi Art District with his cat after his release. Photo: Courtesy of Ai Weiwei

Ai Weiwei's first interview since being released from detention started with a tour of the renovations he's having done to his home and studio in the Caochangdi Art District in northeast Beijing.

"I'm having my studio and kitchen painted, and I've bought some new furniture to give the place a fresh look," said Ai, looking relaxed in a deep blue T-shirt that hung loosely on his more svelte frame.

Ai may have a new-look home and body but he remained politically feisty during a six-hour, exclusive interview with the Global Times.

Though a prestigious artist, he has been catching the world's attention more often in recent years through his vigorously campaigning for democracy than for his art. He has been labeled by international media as one of the strongest critics of the Chinese government.

While Ai continues to demand reforms, he said he has never called for a change to the form of China's government. "Overthrowing the regime through a radical revolution is not the way to solve China's problems," Ai said. "The most important thing is a scientific and democratic political system."

Throughout the day, Ai seemed his usual droll self, neither becoming too excited nor ever seeming despondent. At times he seemed flirtatious and was above all relaxed. "It feels good to be home," Ai said in an off-guard moment as he stretched out to pet his cocker spaniel.

The outspoken artist was released on bail on June 22 and the authorities said he had confessed to tax evasion and promised to pay the overdue amount. Authorities maintain Ai's company, Beijing Fake Cultural Development Ltd, had evaded a "huge amount" of taxes and intentionally destroyed accounting documents, the Xinhua News Agency reported.

Ai's detention sparked an international outcry with the Western media politicizing the case and the Chinese government telling them to mind their own business.

Ai agreed to be interviewed but insisted that he not be asked about details of his detention.

Ai said he has resumed normal life and although a condition of his bail forbids him from using Twitter, he still surfs the Internet for news.

Most afternoon he spends several hours with his 2-year-old son, and he walks around the art district where he lives. "I didn't have much time with my family members before, but now I have plenty of time. I see my son as often as possible," Ai said with a fatherly smile on his face.

Despite the sensitive issues surrounding his case and his release, Ai talked openly about his emotions, ideas and his thoughts while in custody. "I was cut off from the outside world. No one told me when I would be released. It felt like I had fallen heavily into a collapsed pit," said Ai, sitting comfortably with his legs folded under him on his new couch.

Ai said not knowing what was happening to his case was the most worrying especially when he thought of his family. "I missed my mother and my son. I was worried that I might not get to see my son grow up," said Ai.

During the serene afternoon at Ai's expansive studio a cat strolls through the courtyard, glances at the dog and disappears. Ai admits he'll be more cautious in the future but he hasn't softened.

"I've been drawn into the vortex of politics," Ai told the Global Times. "I will never avoid politics, none of us can. We live in a politicized society."Ai crossed his arms and looked serious. He paused for a thought and continued: "You give up your rights when you dodge them. Of course you might live an easier life if you abandon some rights. But there are so many injustices, and limited educational resources. They all diminish happiness. I will never stop fighting injustice."

Ai was detained at the Beijing airport on April 3. The authorities disclosed until April 6 that the police was investigating Ai for suspected economic crimes. On June 22, the authorities released Ai on bail after he reportedly signed a statement indicating he was guilty of tax evasion and willing to pay the overdue tax bill, Xinhua reported.

Ai admitted to the Global Times that he signed a document but says it was not a confession. He agreed that if he were proven guilty he would accept the punishment.

"I am the art director of the company and don't really pay any attention to its financial situation," he conceded.

Ai's wife Lu Qing is the legal representative of the design company.

The artist's claim of innocence is not all that convincing to his many critics.

"The crux of the matter is simple: Ai is involved in a criminal case. He was detained because he was suspected of having evaded a large amount of taxes," Liu Nanlai, vice director of the Research Center of the Human Rights at the Chinese Academy of Social Sciences (CASS) told the Global Times.

Liu explained that even though Ai said he was not aware of tax evasion conducted by his accountant, obviously, "the accountant won't evade tax without any order from management."

Xiong Qiuhong, the director of the Institute of the Criminal Action Law at the CASS said that it is common for Chinese artists to intentionally or unintentionally evade taxes.

"Many famous artists have been caught and punished for evading taxes. Ai's case is not the only one," Xiong said.

Xiong wants the local authorities to try Ai in a public trial on tax evasion. "In this way, we can prevent Westerners from politicizing the case," Xiong said.

Xiong also warned, "if you are a dissident, you should keep your ass clean and not get involved in any crime, so that local governments cannot find you guilty."

While the international community has lauded Ai for his art and for pushing the boundaries of free speech in China, many Chinese experts have criticized him for his extreme acts both in art and politics.

"Is that really art? If that's really art, then anyone can become an artist," Sima told the Global Times excitedly.

"As an artist, Ai has crossed the boundary of art and involved himself in the political arena. He claims freedom while he has no idea freedom is accompanied by responsibility. Spreading speeches that instigate the public to challenge the rule of the Communist Party is a violation of Constitutional principles."

Ai was an avid user of social media. Before he was detained Ai had 92,000 followers on Twitter, which is banned in China but can be accessed through overseas backdoor channels for a price. He has tweeted more than 60,000 times – most of which advocate democracy and free speech.

"I don't mean to politicize my artwork. I'm complying with the principles of ethics and aesthetics. Art is connected to politics," Ai told the Global Times.

Ai spent 12 years in New York where he had several exhibitions of his works and met visiting Chinese artists such as film directors Feng Xiaogang and Chen Kaige, and composer Tan Dun.

He also gained fame for having a hand in the design of Beijing's iconic National Stadium known as the Bird's Nest.

Ai also conducted his own, private investigation into the list of schoolchildren killed during the 2008 Sichuan earthquakes. He clashed with local authorities after claiming the number of students killed were high because their schools were poorly constructed. He mounted a shocking and disturbing installation in Europe that comprised of 9,000 brightly colored student backpacks.

His activism hasn't hurt the sale of his art. In February, Ai's piece "Kuihuazi" (Sunflower Seeds) sold for $560,000 at Sotheby's in London after it had been on display at the Tate Modern's Turbine Hall in London.

"I felt very humbled by the high price, but it's all determined by the market," Ai said with a shrug. "I don't need much money for a luxurious life. My life is simple. What I want is the opportunity for everyone in the country to share in a just society."

Some critics have also condemned Ai for his close connections to what they call "foreign forces who want to descend China into turmoil."

"Foreign countries won't pass up any opportunity to defame the Chinese government and threaten the regime to prevent China from enjoying its hard-earned era of peace and development," Sima Nan said.

"Ai's case has been used by the Westerners," Wu Danhong, an assistant professor at the China University of Political Science and Law, told the Global Times. Wu is another critic who says Ai may be in cahoots with an unseen international conspiracy. "By condemning China's repression of dissidents in the name of democracy, foreign countries that don't want a stronger China intentionally attempt to descend China into turmoil by hyping Ai's case."

Yet Wu also wants to see a more transparent legal system in China that will enhance public trust. "Dealing with legal cases openly and transparently will plug the loopholes that are being used by the ill-intentioned," Wu said.

'No one is above the law'

Contingent on his being allowed to leave China, Ai has accepted a teaching offer at the Berlin University of the Arts.

Even though the terms of his release restrict him to Beijing for a year, Ai said he would never consider permanently leaving the country. "People with black hearts should be exiled, I will never leave," Ai said with a laugh.

Although the outspoken artist is banned from speaking to the Western media, "including through Twitter," for at least one year, he returned to the Internet via a Google+ account last week.

Along with his innocuous inaugural comments on Google+ ("I'm here, greetings," and "Here's proof of life"), he also posted a gallery of black and white photographs from his time in New York as a young artist in the 1980's and early 1990's.

The Google+ community has quickly taken notice. As of the press time, more than 9,000 users have added Ai to their circle of contacts.

"Look, the information explosion, and the development of the Internet, have made the impossible possible. This is the best time for China," Ai said.

Ai said although he has strong political opinions he is not all that sure of himself. "I'm an artist, but I'm more than that. I'm the type of person who can easily feel insecure and fill with worry," said Ai pensively. "I just want to do something to increase our sense of security in China."

Ai agreed to talk to the Global Times even though the paper's editorial was highly critical of the West's politicizing of the case against the rebel artist. It was one of the few papers in China to touch the subject of Ai's detention who said he agrees with the editorial's main premise.