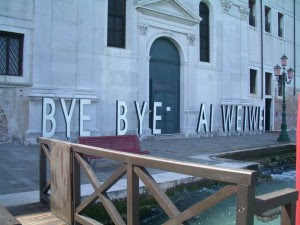 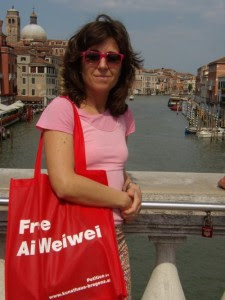 At the world’s biggest art event this summer, the Venice Biennale, the world’s most famous imprisoned artist, Ai Weiwei, was not exactly neglected—but his case received virtually no official acknowledgment.

Every two years the Italians invite dozens of nations to exhibit their leading artists, and this year the Biennale had 88 official “participating countries,” plus an additional 37 “collateral events.” And then there was an unofficial contribution, “Bye Bye Ai Weiwei,” written in six-foot tall white neon letters along the Giudecca canal, visible to all the passing vapporetti (water buses).


Photo taken by the author
But what did it mean? “This looks insulting,” the Guardian reviewer wrote, “like telling the artist to fuck off.” To some it seemed like bidding him farewell, accepting his imprisonment. Others thought “bye bye” was a mistranslation of “ciao,” which in this context should have been rendered as “Hello Ai Weiwei.” Still others thought it would have been better to say “Remember Ai Weiwei”—or simply “Free Ai Weiwei!”

But the artist, Giuseppe Tampone , insisted that “Bye Bye” was not mistranslation, that he had been misunderstood. At the website www.byebyeaiweiwei.com, his explanation was presented in hard-to-understand English: “Bye Bye Ai Weiwei for all those that will not shout by any means ‘I don’t accept the bye bye.’”

The rest of his statement needs translation into comprehensible English: Stampione argued that “Hello Ai WeiWei” was “too easy,” because it seemed to offer hope, while hope in his view implied a passive stance. What was required, he argued, was “to realize the terrible situation in which Ai WeiWei is living today,” and then to take action to free him—political action, pressuring government leaders to take a stand and make demands of the Chinese authorities.

A second Ai Weiwei protest was organized for the official Biennale preview—the elite event for press and VIPs—by the Kunsthaus Bregenz in Austria, which enlisted students to hand out 5,000 red tote bags inscribed “Free Ai Weiwei.” The bags included a call to sign a petition on the Kunsthaus website, initiated by the Guggenheim. The bag distribution had been planned for all three days of the preview, but all 5,000 bags had been taken by the second day.


Photo from Artworks.com
The People’s Republic of China does have an official exhibition at the Biennale, on the grounds of the Arsenale, the medieval Venetian shipyards, the site of a dozen other official exhibits. You might think the appropriate place to protest the imprisonment of Ai Weiwei would be the official PRC exhibit, but apparently the only protest there came at the opening, when people held up the “Free Ai Weiwei” tote bags. (For a report on Chinese art at the Biennale, see the Red Box Review.)

Perhaps the most striking thing about all this is the absence of any recognition of Ai Weiwei’s imprisonment on the part of the officials of the Biennale, especially curator Brice Curiger. Ai Weiwei was mentioned only once at an official event: at the first day opening of the preview, Paolo Baratta, president of the Biennale, told reporters, “We are great friends with the Chinese.” Then came a pause that implied “but,” followed by “I have written a letter to the ambassador of China in Italy saying how wonderful it would be if we could have happy news about Ai Weiwei.” And that was it for Ai WeiWei at the 2011 Venice Biennale.

* Jon Wiener is a longtime friend of but first time contributor to China Beat. He is a Professor of History at UC Irvine, the author of several books (including Gimme Some Truth: The John Lennon FBI Files), a contributing editor to the Nation, and the host of a KPFK radio show whose past guests have included Peter Hessler and several other writers who focus on China.