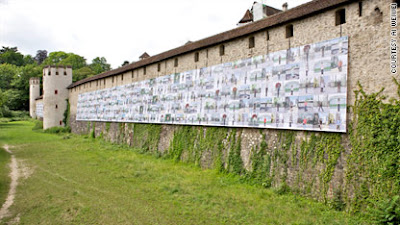 CNN 艾未未的艺术入侵巴塞尔街头
2011年6月16日 By Laura Allsop
巴塞尔艺术展被认为是现代和当代艺术最高规格的艺术展览，第42界展览于本周开始。本次展览采取将艺术品放在城市户外景观中展览的方式。这样当地的居民可以免费参观艺术品，而且外来的游客可以在参观艺术品的同时浏览巴塞尔风景。
本次在巴塞尔城市公共地方展出的雕塑和装置作品包括来自中国艺术家艾未未的作品。
在艺术家艾未未被中国政府拘禁之前，他已经完成了作品——2007年作为卡塞尔文献展艺术作品“童话”中1001中国人当中的500个人的肖像照片组成的横幅。
这件作品现在挂在巴塞尔老城墙上。 “这项工作是要在不同类型的墙里找到适合的墙。把这个作品与墙连接起来，看到城墙的象征意义，这是非常有趣的" 霍夫曼说。
……
原文链接：http://goo.gl/jl1n0
Ai Weiwei's art invades the streets of Basel
By Laura Allsop for CNN
June 16, 2011 -- Updated 1412 GMT (2212 HKT)
(CNN) -- Dotted among its quiet, tree-lined streets; on the shore of its snaking river; and up as far as its medieval walls: contemporary art is invading the very fabric of the Swiss city of Basel.
Commissioned as part of the 42nd Art Basel, described as the world's top fair for modern and contemporary art, which opens this week, Art Parcours is putting art out in the urban landscape, inviting locals to appreciate it for free and getting visitors to the fair to see more of Basel.
Sculpture and installations by artists including incarcerated Chinese sculptor and performance artist Ai Weiwei, and British-Nigerian multimedia artist Yinka Shonibare, are displayed publicly at various points around the city for the duration of Art Basel.
"The (organizers of the) fair were very interested in bringing the art away from the exhibition hall and into the city, so that the citizens of Basel could experience what was going on during the period," explained Art Parcours curator, Jens Hoffman.
"I was thinking it would be interesting to introduce the viewer to the history of Basel from these different buildings and have artists make interventions into these buildings," he continued.
Most of the pieces ... they have this idea of somehow activating the city or changing how you get to know a city through the public space
--Federico Herrero, artist
RELATED TOPICS
Basel
Painting
Visual Arts
Arts, Entertainment, and Media
Duly, Ai Weiwei -- before he was jailed by the Chinese authorities -- created banners composed of photographic portraits of 500 of the 1,001 Chinese people that he brought to Kassel in 2007 as part of art work "Fairytale."
Chinese artist Ai Weiwei absent from 'bitter-sweet' exhibition
The images are being displayed on Basel's old city wall. "The work is about different types of walls that you need to overcome to get to a place, so it was interesting to connect that piece to that message, and see the symbolic value of the city walls," said Hoffman.
Other works include American artist Anne Chu's project in the Hohen Dolder House, one of the oldest buildings in the city that houses murals detailing the life and times of Swiss folk hero, William Tell. Chu's work reinterprets the story with clay puppets, creating an encounter between the mural's depiction and her own reworking of it.
Belgian artist Kris Martin is filling the aisle of a church with coins and Ugo Rondinone is presenting gnarled and twisted sculptures in the same church's courtyard.
The River Rhine will be brightened by colored kites hanging from trees along its bank, courtesy of Shonibare, while Costa Rican painter Federico Herrero has built frames around the walls of four fishermen's houses along the river and painted brightly colored patterns onto them.
"I have this intention of inserting a landscape within the previous landscape, so that you have another perspective and you activate something very different in the area," Herrero explained.
"I would say that most of the pieces in the Art Parcours program somehow don't relate or function inside of the traditional gallery or white cube, so they have this idea of somehow activating the city or changing how you get to know a city through the public space," he said.
Global roundup: This season's must-see exhibitions
Locals who witnessed him painting the houses seemed pleased, he said, that he was working in the neighborhood and taking art out of the museum or gallery and into the community -- and brightening it up in the process.
Such local approval is exactly what curator Hoffman had in mind when he first came up with the idea for the project, which is now in its second year.
"Art Parcours is an off-side event that is connected to the main fair but is disconnected from just being purely about the market," he said.
"I like the idea of the neighbors bumping into (the work) and having some kind of reaction to it," said Herrero.
"That's where the Parcours bit comes in," he added.
发表于 6/17/2011