原文地址：http://www.guardian.co.uk/artanddesign/jonathanjonesblog/2011/apr/14/ai-weiwei-china-human-rights
Ai Weiwei's work to defend human rights would stand even if he were guilty – but it's safe to assume these charges are fabricated 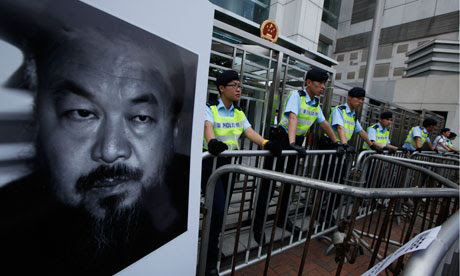 Talking liberties ... Ai Weiwei's face on a poster outside the Chinese liaison office in Hong Kong. Photograph: Kin Cheung/AP
The story of Ai Weiwei is turning into a dark fable that seems to belong in another age of modern history. In Bertolt Brecht's play Life of Galileo, a dissident intellectual recants his beliefs under pressure from an intolerant regime. It was a hit in the US, but Brecht, a communist, decided in spite of its success to return to live in east Berlin. Later, as he observed the absurdities of the Soviet regime, he was moved to joke that the state should elect another people.
Those absurdities are brilliantly recreated in the historically set Berlin filmThe Lives of Others, and anyone who has watched it must surely feel a shiver of familiarity at official news from China that Ai Weiwei is co-operating with enquiries into alleged economic crimes and bigamy. Observers who side with the Chinese government on this should be ashamed, and those who dislike Ai Weiwei's art and so welcome any prospect of his undoing are seriously confused about basic human rights. The fact is that regimes such as the Soviet and the Chinese are brilliant at exploiting weaknesses and flaws in the people they need to crush. Dissidents can be shamed and subdued in many ways. What do you think a police state is? It is a place where truth can be manipulated.
Ai Weiwei has spoken out eloquently for the universality of human rights and the worldwide hunger for freedom. Even if all the charges China are apparently raising were true, it would not alter anything – and given his brutal detention it is reasonable to assume they are false.
Something historically obscene is happening here. It is as if different times exist simultaneously. In one time-stream, democracy is in global demand and artists including Ai Weiwei are revealing the richness of China's culture to the world. Yet in the sinister second stream it is 1950, and dissidents can be blackguarded and bullied with total impunity by a system that takes Orwell's 1984 as a handbook.
The cleverest thing about The Lives of Others is that it lulls you into a similar eddy of time. You have no idea what year the characters suffer in – and then suddenly it turns out to be 1989 and the Berlin Wall comes down. What seemed a totalitarian system beyond resisting turns out to be a fragile fantasy world that vanishes overnight.
Ai Weiwei is not being tested here – not in the eyes of anyone who cares about freedom or justice. His oppressors are the ones who will be judged. Neither does he have to satisfy some western craving for heroics. "Pity the land that has no heroes," says a character in Brecht's play – to which Galileo replies: "Pity the land that needs heroes."
发表于 4/15/2011